A Fresh Look at Educational Attainment: How Canada Can Be Number One and Still Have Room to Grow

The release each autumn of Education at a Glance, the OECD’s compendium of education statistics, is always a welcome event in Canada. It allows us to draw attention to this flattering headline: Canada is the most educated country in the developed world.

This year’s edition, released on Tuesday, is no exception. The OECD reports that 54% of Canadians have attained some form of tertiary education (i.e., college or university), which is more than any other OECD member country and significantly higher than the OECD average of 33%. While this is hardly news, the annual reconfirmation of our education advantage still serves as a nice pat on the back. In a knowledge-based economy, there is no better place for Canada to be than at the top of the global ranking in education attainment.

As you might expect, not everyone is convinced that we should be so quick to congratulate ourselves. Critics argue that the claim that we are number one in education overstates Canada’s advantage in two ways: 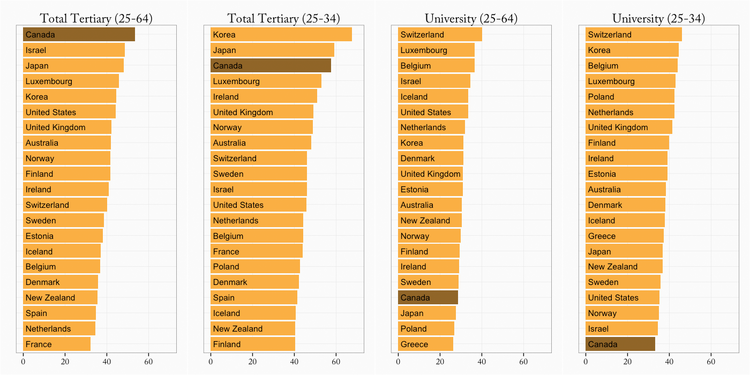 But how much weight should we give these reservations?

It is certainly true that Canada’s comparative advantage in education is eroding over time. This does not mean that Canada’s performance is declining; rather, it means that other countries are catching up.

In many ways, Canada’s top position overall reflects the fact that its postsecondary education system expanded somewhat earlier in the postwar period than did that of many European or Asian countries. Thus older Canadians—many of whom had the opportunity to obtain a college or university education—enjoy a significant educational advantage over their OECD counterparts that we cannot expect to continue for younger generations.

That said, the important question to be asked now is: where is the international bar in educational attainment being set? The answer is that it is being set higher with each passing year. This doesn’t mean that we should be any less celebratory of our educational achievements to date. But it does mean that education is much like investing: past performance is no guarantee of future returns. If we want to retain our position as the developed world’s most educated society, the last thing we need is to slip into complacency. This brings us to the second of the two reservations.

The observation that Canada’s top position reflects its unusually high level of college attainment and masks poorer performance in university attainment is potentially more controversial. To a certain extent, it is only a cause for concern if one concedes that a university degree is “higher” than or superior to a college diploma, and therefore that Canada’s overall performance in terms of tertiary education attainment is not as good as it seems because it is so heavily weighted to the college side. This is not the only possible interpretation. A viable counter-argument is that Canada’s dominant college sector gives the country a comparative advantage in terms of the practical and technical skills in demand in the contemporary labour market. Canada’s overall education attainment profile could be said to be not only tops overall, but also better balanced and more aligned with labour market needs.

I do not intend to adjudicate between these two competing spins. I have written elsewhere about the need to avoid pitting the two sectors against each other, as though gains in one sector can only be made at the expense of the other, and to focus instead on the objective of growing overall attainment. If we adopt this approach, we can more easily agree that our robust college sector is a tremendous strength, and that by international standards our level of university attainment is low. We do not have to question the value of a college education in order to point out that there is considerable room to grow on the university side.

Importantly, what the OECD report does not tell us is that our performance in terms of university attainment is actually worse than it appears at first—that is, if we think of “attainment” in terms of the flow of students from the earliest stages of education through to the completion of a university degree. In order to understand why, we need to focus again on Canada’s more or less unique approach to human capital development.

It is natural to think of the figures on educational attainment as a reflection of the output of a country’s education system: a country’s population attains the level of education that its schools, colleges, and universities succeed in producing.  But this is not really the case, at least not in countries like Canada where immigration makes such an important contribution to the adult population’s overall skills profile. The attainment figures are simply a snapshot of the educational qualifications of the adult population at a given moment in time. In Canada, many adults are immigrants who arrived in this country with their education credentials already in hand. Our level of educational attainment therefore reflects both the contributions of our domestic education systems and our method of immigrant selection.

When it comes to looking at the proportion of adults with a university degree, this matters greatly. Immigrants in Canada are much more likely than those born here to hold a university degree. In 2014, 40% of landed immigrants were university educated, compared with 24% of non-immigrants; for younger adults aged 24 to 35, the figures were slightly higher, at 45% and 29% respectively.

Notably, even though the university attainment rate for those making their way through our domestic education systems is slowly increasing, the rate for those immigrating to Canada is increasing at a faster pace (that is, our highly educated immigrants are becoming even better educated with each passing year). This means that the edge that immigrants have over non-immigrants in terms of university attainment rate is growing wider with time. It also means that immigrants are becoming an ever more important component of our total university-educated population (for example, in 2014, 31% of 24 to 35 year olds in Canada with a university degree were immigrants, compared with 27% five years earlier).

Half of new labour force entrants with a degree are immigrants

Over the past few years, almost half of new entrants into the young-adult labour force with a university degree have been immigrants—underlining the importance of this sector for human capital development in Canada. In other words, for every two additions to the university-educated labour force (age 24 to 35), the education system is contributing one and immigration is contributing the other.

How much this matters depends again on one’s point of view. From the perspective of the labour market, it may not matter at all. If the goal is to ensure that there a certain amount and type of human capital is available within the workforce, the question of whether workers gained that capital within Canada or before moving to Canada is largely irrelevant. And, of course, from the perspective of the immigration system, it is a tremendous policy success that is of significant benefit to Canada’s wellbeing and prosperity.

From the perspective of the education system, however, an important question arises. Given the premium put on education for the success of young people today, does it make sense that only 3 in 10 Canadian-born children end up as university graduates?

A second look at the rankings: room to grow

To drive the point home, it is worth having another look at the newly published OECD tables. As noted above, Canada ranks 21st among OECD members in terms of the proportion of young adults with a university degree. This rank, as low as it is, is still weighted upwards up by the contribution of immigrants to Canada that arrive with a university degree in hand. If we considered only those educated in Canada, our ranking would be even lower—probably somewhere between 23rd and 26th place. We would cluster with a few low-ranking European countries such as Spain, France, and Italy, and decisively edge out only Mexico, Austria, Chile, and Turkey.

Despite the reassuring headline that we rank number one overall, the inescapable conclusion is that there is considerable room to grow the university attainment rate for those making their way through Canada’s education systems. This is something to keep in mind for those who worry that we might be pushing too many young people into university. Whatever one’s take on the figures are, there are very few people who would agree that “26th place” is where Canada wants to be.

* Note: In the graph above, all of the data comes from the latest OECD report (released November 24, 2015) with the exception of Japan. In the latest report, the college-level attainment data for Japan is missing, so the data from 2014 has been used for this aspect of total postsecondary attainment.