Instead, the post-secondary institutions are shying away from being forums where people can feel free to challenge or debate, says the founder of the Justice Centre for Constitutional Freedoms, based in Alberta.

"Today a lot of people believe very strongly that they have a legal right not to be offended by what they see and hear," said John Carpay, who was reacting to the removal of professor Michael Persinger from teaching a first year psychology class at Laurentian University in Sudbury.

Persinger had asked students to sign a contract showing they understood he might be using certain vulgar words as a part of classroom instruction. 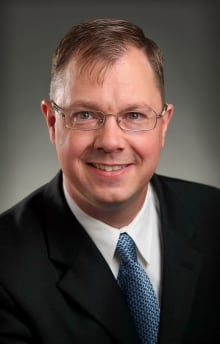 Photo above: John Carpay is one of the founders of the Justice Centre for Constitutional Freedoms, based in Alberta.

'Being offended part of living in a free society'

Carpay says there has been a dramatic shift in what can be said on campuses today.

"Twenty, 30, 40 years ago, people understood that being offended is part of living in a free society. If you believe in freedom of expression that means everybody sooner or later is going to hear something they find deeply hurtful and deeply offensive," said Carpay.

Officials at Laurentian University say Persinger was not suspended over his use of obscene language, but because he asked students to sign a form consenting to his use of vulgar words in the lecture hall. Persinger is not allowed to weed out students based on whether they sign a contract or not, said university administration.

The Justice Centre for Constitutional Freedoms grades Canadian universities on their support for free speech.

It gave Laurentian University a 'B' for its policies and an a 'A' for standing up for free expression on campus and its supportive policies in the past.