Article and Photo from CBC News
By Shaun Waters
Posted: May 27, 2016

A member of the University of New Brunswick's board of governors is going public with his concerns about the school's budget priorities.

Julian Renaud said the school is not funding its academic programs properly and is wasting millions on a marketing campaign instead.

Renaud said the Why UNB? campaign was pitched to the board as the ideal way to boost enrolment.

Millions will be spent on Google ads and other online messages to encourage students to apply for the University of New Brunswick.

Renaud said the board of governors was told that a similar style of campaign boosted enrolment dramatically at Dalhousie University. 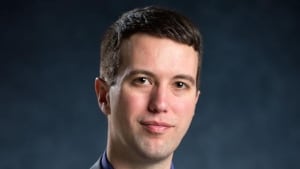 Julian Renaud is one of three student representatives on UNB's board of governors. (Submitted Julian Renauld)

But he said that when someone from the board looked more closely at that claim it turns out advertising wasn't the reason.

"They increased their enrolment because they devoted a lot of funding to their academy in order to increase the capacity of faculties that were in demand such as computer science and engineering."

'They're spending a huge amount of money on UNB's administration and increasingly so.' - Julian Renaud, UNB governor

Renaud said Dalhousie's computer science faculty almost doubled in size and its faculty of engineering grew by 58 per cent or about 900 students.

Renaud said its numbers also jumped sharply after it started including the Nova Scotia Agricultural College as part of its overall enrolment.

By comparison, Renaud said UNB has a faculty hiring freeze in place.

He said the only expansion that's taken place at the school has not involved bringing in students.

"They're spending a huge amount of money on UNB's administration and increasingly so," said Renaud.

"You know in the most recent budget we ended up hiring basically an entire marketing department on top of what we already had."

Renaud is a law student at UNB and is one of three university governors elected by students. He is one of 34 voting members on the board. UNB's board of governors also has nine non-voting members. 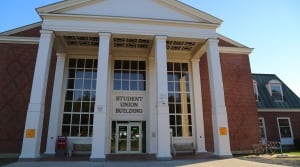 Renaud is a law student at UNB and is one of 34 voting members on the university's board. UNB's board of governors also has nine non-voting members. (Daniel McHardie/CBC)

On Wednesday, UNB announced the board of governors had approved a 2016-17 operating budget that projects a $2.6-million deficit for the year.

The budget increases tuition by five per cent, with a three per cent rebate given to students from New Brunswick to comply with the provincial government's two per cent limit on tuition increases for New Brunswick students.

International students will see a 10 per cent increase in the differential fees they pay on top of their tuition.

Renaud said UNB is also trying to boost enrolment in its arts programs when evidence shows that across the country those programs are losing students, not attracting them.

"A rationale for UNB's investment in the Why UNB campaign."

The memo justifies the school's spending on marketing. It said UNB is facing a significant decline in enrolment due to a number of factors including an aging population in New Brunswick.

"We are developing the capacity to better tell our story to a variety of audiences, including prospective students and their parents across Canada in the first instance and our government and the people of the province in the second," the memo states.

"There is further work to be done to attract additional graduate and international students."

The school says its enrolment has declined by 12 per cent since 2007-2008 and that equates to an $8 million loss of tuition revenue.